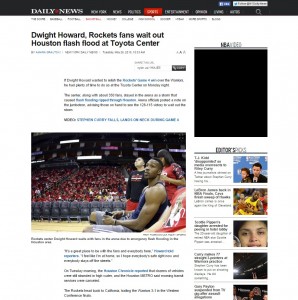 I will not soon forget May 25, 2015. The Houston Rockets were down 0-3 in the NBA Western Conference finals against the Golden State Warriors. Game 3 on May 23 was particularly brutal for the Rockets and everybody thought the Rockets were dead in the water. Game 4 was scheduled for Memorial Day (May 25), and it was expected that the Warriors would easily complete a 4-0 sweep of the series. The weather forecast for Houston called for heavy rain throughout Memorial Day and into the evening- which was no big surprise as Houston saw heavy rains for the good part of the month. Since game 4 could possibly be a clinching game for the Warriors, USA TODAY Sports said I could bring a runner- to take memory cards back and forth from the photographers and an editor in the media work room. This way- photographers would not have to stop and leave their position to transmit images during the game. Rhonda served as our card runner for game 4, and from the start of the game, the Rockets jumped out to an early lead. By the middle of the third quarter everything looked good for a Rockets victory. However, during the fourth quarter, the radar showed heavy thunderstorms moving into the area. Nobody was prepared for the heavy rains and flooding that would blast Houston that night. By the end of the game, the Rockets public address advised fans to remain in the arena after the game because the weather and street flooding was too dangerous to leave. Many fans left, but some stayed. After the game, Toyota Center employees immediately began cleaning the arena and removing the basketball court flooring in preparation for a Neil Diamond concert, scheduled for the next day. Fans were moved to one section of the arena and watched the digital display board, which was broadcasting a local news feed. Eventually, Rockets center Dwight Howard made his way onto the court to applause from the fans who stayed behind. He posed for a couple of pictures and sat on a chair on the court, watching with the fans for updates on the weather situation. Howard’s son was also with him and kept the remaining crowd entertained- running around and doing flips on the court. My cameras were put away for the evening, but I went back and got one out to take pictures of the situation. We decided to also stay in the arena and wait out the storm and flooding. After this picture (and some others) were taken, I went back to the media work room (dining room) to have the pictures uploaded. We stayed in that room until 6 am when Niel Diamond’s road crew began arriving to setup for the show and said the roads looked okay. We made it home safely but many people who left the arena earlier in the evening/morning were stuck in traffic and/or had their cars engulfed in the rising flood waters. The Memorial Day flood of 2015 was a horrible weather event with a few people dying in the floods. It was a long night and we didn’t get any sleep- but I’m glad we stayed at the arena and made it home safely with no damage.