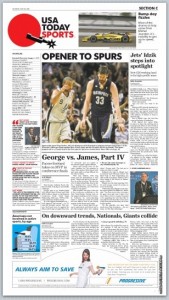 In May of 2013, the San Antonio Spurs were in the Western Conference finals against the Memphis Grizzlies. I was asked to cover Game 1 so I took the family and we embarked on a roadie to San Antonio. After the game was complete, I had transmitted lots of photos already, and for this game, they had asked me to make a video with USA TODAY reporter Sam Amick reporting after the game. This was my first ever video assignment and I was pretty nervous about it. As I transmitted my final photos, I got an email that USA TODAY wanted to run a picture of Tony Parker so could I please send more Tony Parker action photos. At first I was a little frustrated because I had already sent quite a few Parker photos and I was in a hurry to get the video assignment done with the USA TODAY reporter. But going back through my images, I found this one. I don’t know how I missed it earlier as it tells the entire story of the game:  Parker making a big shot and Marc Gasol of the Grizzlies hanging his head. The Spurs won the game and swept Memphis in the series 4-0 to advance to the NBA finals against the Miami Heat.